Gardens by the Bay is home to more than 40 sculptures from around the world. Featuring unique pieces, intriguing crafts and stone works, these sculptures complement the beauty of the plant displays and add a new dimension to the landscape. 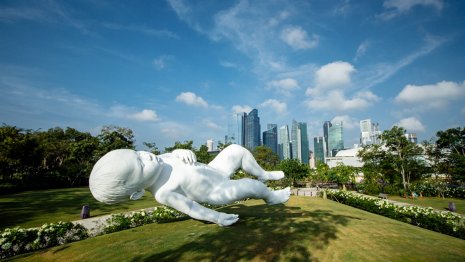 SCULPTOR: MARC QUINN (UNITED KINGDOM)
GIFTED BY MR & MRS MASAGUNG
A hefty seven tons, this impressive bronze sculpture is 9m long and 3m tall. It portrays an oversized reproduction of the artist’s own son, Lucas, as a baby. The sculpture’s weight is masterfully balanced on the infant’s right hand, creating the illusion that the sculpture is floating in the air. Created in 2008, the sculpture was exhibited for the first time at the Beyond Limits exhibition of contemporary sculpture at Chatsworth House, then later at the 2012 The Littoral Zone, at the Musee Oceanographic in Monaco.
Near The Meadow | Painted bronze and steel 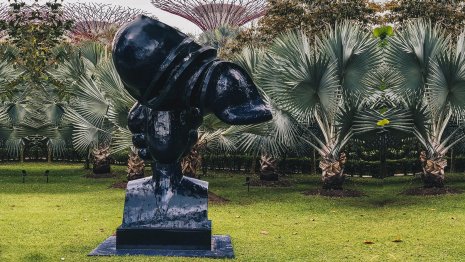 SCULPTOR: MANOLO VALDÉS
Influenced by historical masterpieces, Valdés creates large works in which the lighting and colours express a sensation of tactility. His work is striking and decorated with historical art symbols. Manolo’s iconic sculptures are exhibited outdoors in the parks and gardens of major cities such as the New York Botanical Gardens, Hofgarten, Dusseldorf and Chatsworth House.
Waterfront Promenade | Painted Bronze 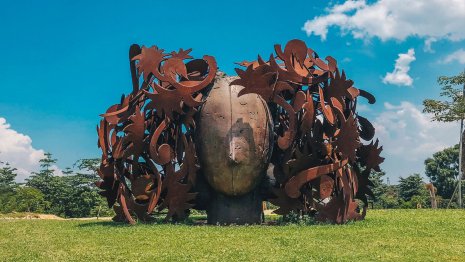 SCULPTOR: MANOLO VALDÉS
Influenced by historical masterpieces, Valdés creates large works in which the lighting and colours express a sensation of tactility. His work is striking and decorated with historical art symbols. Manolo’s iconic sculptures are exhibited outdoors in the parks and gardens of major cities such as the New York Botanical Gardens, Hofgarten, Dusseldorf and Chatsworth House.
Top of The Meadow slope | Steel 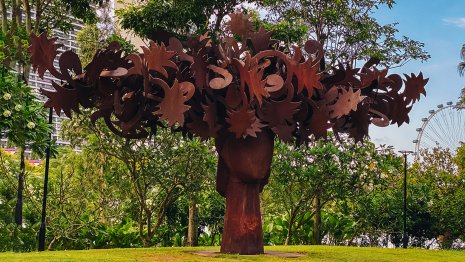 SCULPTOR: MANOLO VALDÉS
Fiore is particularly captivating with an extensive headdress composed with flora and fauna that are reminiscent of Henri Matisse’s still-lifes. Valdés’s works are highly inspired by nature. The composition of flora and fauna, the naturally occurring rust-coloured patina of the steel, resonates with the artist’s relationship to nature and culture.
Opposite Planet sculpture | Steel 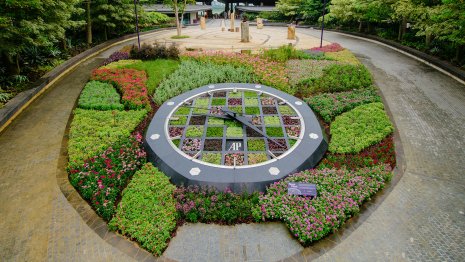 GIFTED BY AUDEMARS PIGUET IN CELEBRATION OF SINGAPORE’S 50TH ANNIVERSARY (IN 2015)
This seven-metre-wide Floral Clock draws inspiration from the signature characteristics of Audemars Piguet’s Royal Oak collection and fuses traditional and contemporary landscaping elements in its design. Featuring tropical plants with coloured foliage and flowers, its plant palette will be refreshed regularly for the public to enjoy.
Beside The Canopy | Stainless steel

The Eagle Has Landed 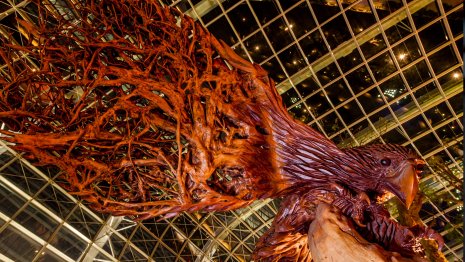 Cleverly crafted from the polished and varnished Lychee roots, this commanding eagle is supported by a plain Lychee tree stump. The eagle has a reputation as a fierce hunter in the sky and its name also resembles the Chinese word for “hero”.
Flower Dome | Stained, polished Lychee (Litchi sinensis) wood 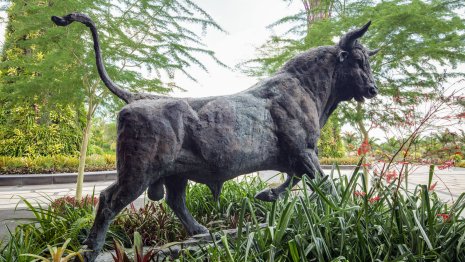 SCULPTOR: WALTER MATIA
GIFTED BY BANK OF AMERICA MERRILL LYNCH
Sited at the Arrival Square of the Gardens, this strong bronze cast bull sculpture by renowned American sculptor Walter Matia (b. 1953) displays a vigour that aptly depicts Singapore’s bullish economy. The artist’s passion about natural history serves as an inspiration to his impressive pieces. In his own words, he uses his visual experience to represent nature, rather than documenting it, by “selecting shapes and organising the masses, lines and negative spaces into sculpture”.
Golden Garden | Bronze 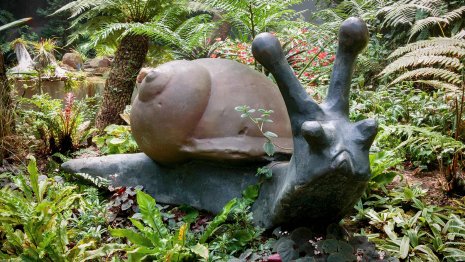 SCULPTOR: WILL WILSON
GIFTED BY TAN JIEW HOE
Wonderfully captured by contemporary Australian artist Will Wilson, a bronze cast of an oversized snail stands among the beds of multi-coloured of begonias growing in the shady and humid Secret Garden. Nearby, several limestone snails by Wang Rong Hai (王荣海) from Xiamen, dot the landscape and provide company for the giant bronze snail.
Cloud Forest | Bronze 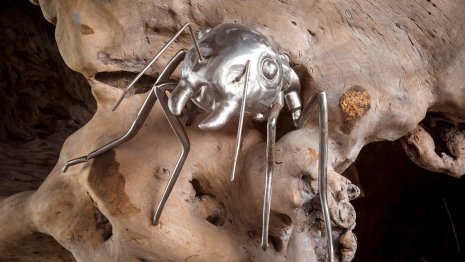 SCULPTOR: ENG SIAK LOY
Climbing all over our “peek-a-boo” trees made from the hollow trunks of Bishop Wood (Bischofia javanica), these curious ants seem to be hard at work and are a favourite with our young visitors. The pieces were designed and sited by renowned local artist, Eng Siak Loy. Those larger-than-life wildlife sculptures are amongst the many which are dotted around the Gardens, to stimulate our curiosity and help us reconnect our urbanized lifestyle with nature.
Outside Flower Dome entrance | Stainless steel 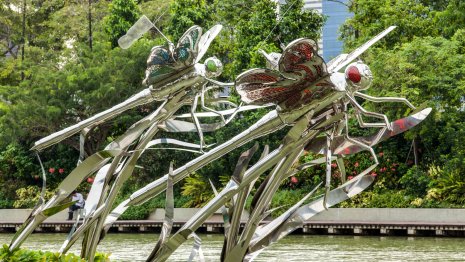 SCULPTOR: DR ELSIE YU
A landmark feature within the tranquil Dragonfly Lake, these magnificent giant dragonflies sculptures with casts of children riding on their backs, measure 5m by 6m. The laser-cut meshed pattern used on the wings of the dragonflies encases colourful art glass, which gives an overall fascinating abstract effect. The eyes of the dragonflies, blue in one sculpture, red in the other, are made of mouth-blown glass flecked with gold. A touch of human warmth amongst our grandiose garden, the sculpture of the child riders is an ode to the joys of childhood.
Dragonfly Lake | Stainless steel, art glass 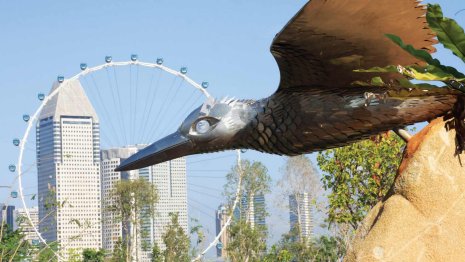 SCULPTOR: ENG SIAK LOY
Comprising two kingfisher sculptures in a perching stance and one in a flight position, the Trio of Kingfishers is given pride of place at the Kingfisher Lake, one of the more tranquil and relaxing spots in the Gardens. These large, impressive kingfisher sculptures are not only location markers but a sight to behold as their metallic feathers catch the changing light on the lake surface. The sightings of nine species of kingfishers have been recorded in Singapore. Some of them, such as the White-throated Kingfisher and the Collared Kingfisher are a familiar and welcome sight at the Gardens.
Kingfisher Lake | Stainless steel 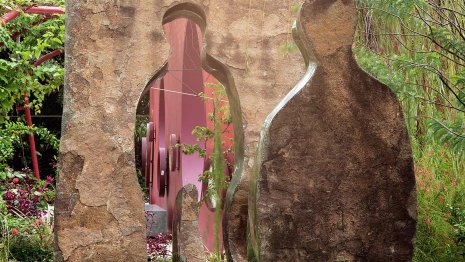 You will encounter a modern piece of sculpture as you depart the Chinese garden and walk towards the Malay Garden. Named Diaspora, or li xiang (离乡), which means “to leave one’s native place”, this two-piece sculpture pays homage to early Chinese immigrants who had journeyed to Singapore in search of a better life. The first piece with a hollow centre, shaped in front of a pond which represents the ocean, while the second cut-out human figure is placed nearer the Malay Garden.
Heritage Gardens (Chinese Gardens) | Springstone Marble 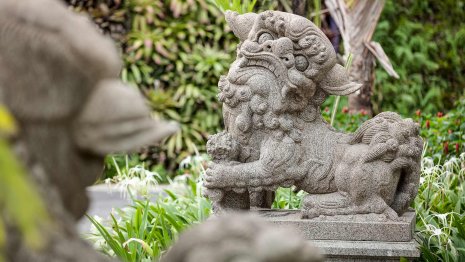 SCULPTOR: WANG RONG HAI
The two pairs of guardian lions placed to welcome visitors at both ends of the Supertree Grove are a prime example of traditional Chinese sculpture. Chinese guardian lions are always presented in pairs, with the male on the right, with its right paw playing with a ball that represents “power” and the female on the left, with a cub under her left paw, which symbolizes the cycle of life. According to the Taoist philosophy, the paired lions are also a representation of yin (female) and yang (male), which are the two contrasting and fundamental elements of the “Way”. While the male lion guards the entrance, the female lion protects the interior of the dwelling.
Supertree Grove | Pale, fine grained granite 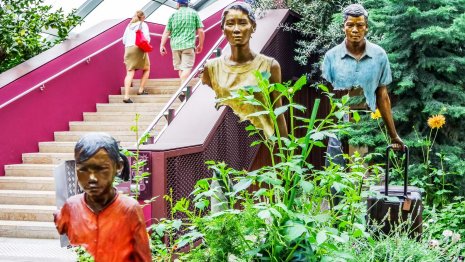 SCULPTOR: BRUNO CATALANO
GIFTED BY CHANGI AIRPORT GROUP
‘La Famille de voyageurs’ (A travelling family) depicts a family visiting Gardens by the Bay before heading home. As they depart Singapore, they take with them beautiful memories and leave a part of themselves behind. Inspired by the universal theme of travel, French sculptor Bruno Catalano’s eye-catching works, with their dashed bodies and the deliberate lack of volume, invite the viewer to mentally reconstruct the possibility of the human potential.
Flower Dome | Bronze 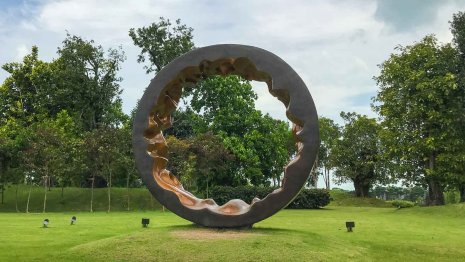 SCULPTOR: CHONG FAH CHEONG (FOR SG50 TIME CAPSULE)
Standing at 3.8m, Moongate features an upright bronze ring with a uniquely textured inner surface modelled after abstract shapes that draw inspiration from the phenomena of our constantly changing natural world, such as shifting sands, tongues of flames, and the changing form of clouds. Conceived as a portal that explores ideas of journeying and arriving, the ring suggests continuity, connectedness and a sense of community that is central to what it means to be Singaporean. In this way, Moongate invites viewers to imagine fresh narratives as we author the next chapter of Singaporean history together.
The sculpture is situated in a lush landscaped garden with variety of flowering plants and trees on one side, and open vistas of the Marina waterfront on the other.
Near Bayfront | Bronze 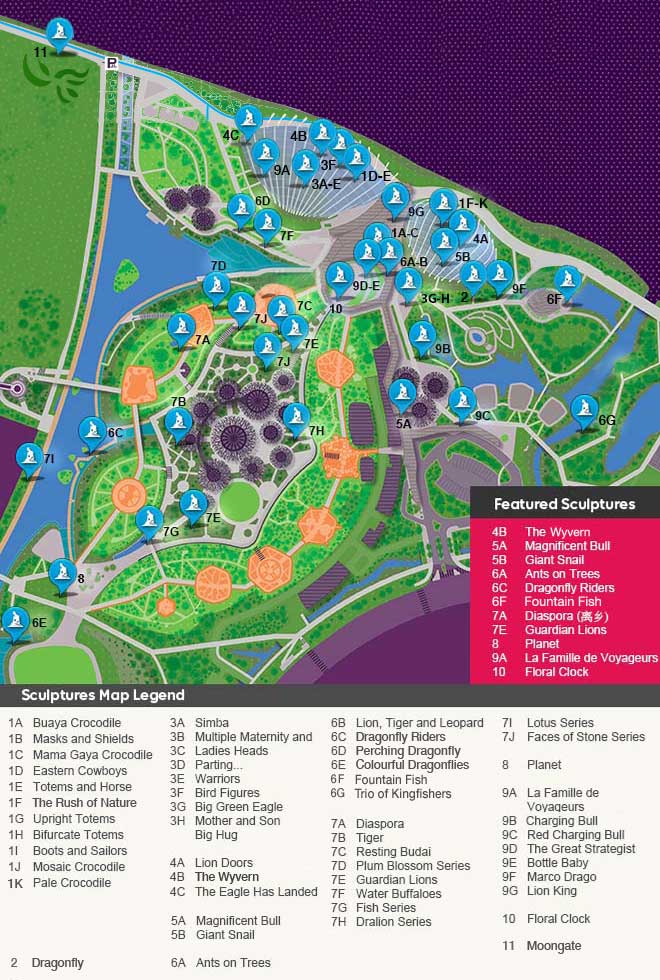